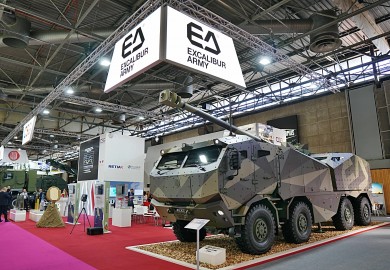 The new wheeled self-propelled howitzer MORANA 155 mm was successfully presented at International defence exhibition EUROSATORY which was held on 13-17 of June.

On the first day of the exhibition, the MORANA howitzer was ceremoniously unveiled by his Excellency, the Czech Ambassador for France Michel Fleischmann and also by the Deputy of Minister of Defense Tomáš Kopečný and by the President of the DSIA Association of the Czech Republic Jiří Hynek.

The Deputy Minister Tomáš Kopečný mentioned during his speech that this was a fundamental demonstration of the importance of artillery and welcomed the newly developed howitzer as an important contribution to the security in the region and wished it an early deployment.

The Ambassador Michel Fleischmann, given the complex nature of weapons as such, emphasized the importance of their production to ensure a security within Europe.